It is with great sadness that we announce the demise of Prof. T. S. Kanaka, who left this world on the afternoon on November 14th, 2018. Prof. Kanaka was Asia’s first female neurosurgeon and among the first few female neurosurgeons in the world having qualified with a degree (MCh) in Neurosurgery in March 1968; after Diana Beck (1902-1956), and Aysima Altinok who qualified in November 1959.

Born the city of Madras, India, Prof. Kanaka completed her MBBS in 1954 and pursued a career in surgery. Her successful struggle to scrub during training lasted for 2 years, after which she learned surgical skills under Dr. Venugopal. Prof. Kanaka served in the Inidan Army during the Indo-China War in 1962. She was part of the stereotactic team led by Prof. Ramamurthi Balasubramaniam, to become one of the pioneers of stereotactic surgery in India. In 1972, Prof. Kanaka completed her PhD in Evaluation of Stereotactic surgery in Cerebral Palsy.

Her first international trip was in 1973 to Japan, after which she did her Colombo plan fellowship. Prof. Kaka was then invited as guest lecturer in the US and Brazil at International Neuroradiology and Stereoencephalography and was a visiting faculty at the UCLA. In 1982, she became member of the International Brain Radiology Organization and in 1988, she pioneered neurostimuation of the Spinal Cord. She received accolades for her work and was invited as guest lecturer to Canada, Germany, Austria and Spain. She was awarded Honorary Presidency of the Asian Women’s Neurosurgical Association (AWNA).

Prof. Kanaka was known for her contribution to social work and serving poor patients in India. She developed low-cost DBS systems to help the underprivileged and established a geriatric rehabilitation and research center. She has been named in the LIMCA book of records for the highest number of blood donations (139 to be exact). 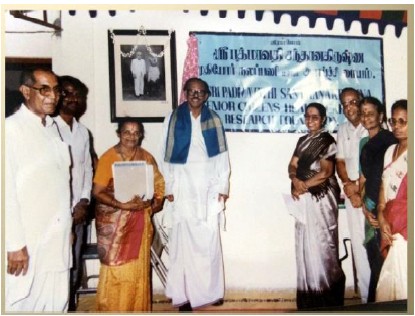 In the later years of her life, Prof. Kanaka retired from her career in Neurosurgery and dedicated her life for social work. The Sri Santhanakrishna Padmavati Healthcare and Research Foundation helps provide healthcare services to the underprivileged.

Prof. Kanaka’s journay is an inspiration for all females, specially in the neurosurgical community. She was a great teacher and mentor to most of today’s famous female neurosurgeons including Prof. Yoko Kato, President of the Asian Congress of Neurological Surgeons (ACNS). Her departure from this world is indeed a great loss for neurosurgical community and she will always be remembered as the first Female Pioneer of Functional Neurosurgery. May her soul rest in peace.